Magna’s presidents describe Don Walker as a man who is ready to cope with anychallenge, from the shifting mobility landscape to a global pandemic.

He is someone who is at home in every setting, from the factory floor to the boardroom –and even a ride at Disney World.

Their reflections about the Magna CEO who has been at the helm through calm andturbulent waters help us learn about our past and contemplate our company’s future.

I joined Magna in 2019 after working for Daimler for 27 years. Peopleasked me if I was crazy to switch to Magna and start from scratch. Butmy first meeting with Don in Cologne, Germany, was a one-of-a-kindinterview. We talked about how he sees the future and how I see thefuture, and all the pressure that is coming from governmentregulations, electrification and new mobility. We talked about whatmobility will look like in 10 or 20 years. It was mind blowing.

Talking to him was a turning point. I absolutely did make the rightdecision.  He has a vision and it’s a vision that inspires people. It’simpressive to see the speed that this company has moving forwardbecause of him.

I’ve been with Magna for 20 years in part because Don Walker is living proofthat you can be a good person and make it all the way to the top in thiscompany. Regardless of my position and level, he’s always treated me exactlythe same. He listens to you and he follows up. He offers to be available at allhours on his private cellphone. He talks to hourly folks on the assembly line.For a CEO, he is down-to-earth, humble and respectful. Don doesn’t wield hisinfluence or power. He truly seeks to connect with all levels of the organizationin a very consistent way.

I share those same values. I identify with the traits that Don shows. I see him asan example to follow.

Shortly after I started with Magna roof systems in 2012, Donvisited one of our plants in Poland. What he did really struck me.He greeted the operators and talked to them. If an operatorasked him a question, he listened. He kept this approach to theend, and because of the way he acted, I always hold up a mirrorto myself. Like Don, I never want to lose being reachable to anyemployee.

At the same time, he ensured that it wasn’t all about one person.In some companies, everything is centralized around oneperson. He knew decentralization is an advantage for Magna.Because of that, Magna still has so much potential, thanks toDon. There’s so much more we can do.

In March 2017, I was attending a GM Supplier Awards event in Orlando, Florida, with Don. The evening before the mainevent, there was an informal gathering of suppliers at Disney World. Don turned to me and said, “Let’s go for a ride!” Afew minutes later, I’m racing along on the Test Track ride located in Future World, part of the Chevrolet Design Center atEpcot. It’s one thing I never thought I’d do with Don Walker. But it speaks to his character. He’s very accessible.

It was a nice moment and makes me remember how down-to-earth Don is. He’s the kind of guy you can spend a fewminutes with, have a little fun and share a Disney ride together.

One of the reasons I always wanted to work for Magna was because Don Walker was such an icon inthe industry. I had a job interview with him in 2004 at his office in Newmarket. He was disarming indemeanor, but could throw in some sharp questions. After the interview,  Mike Sinnaeve phoned meand said everything went well. I asked, “Was there any feedback?” “Yes,” he said. “Don said you smiletoo much.” It was a testimony to Don’s intensity. While I don’t "smile too much" less, I have picked upa lot of other habits from Don.

When I go to plants, I go out of my way to meet people. I eat in the lunchroom with everybody. Itbuilds a goodwill bank account. When Don came to visit me in the plants, he’d be wearing boots,jeans and an older shirt. People on the plant floor loved him. Whether at a Magna event, or on theshop floor, Don will be remembered as someone who went out of his way to connect with people.

I was the general manager of Dortec Industries in 1999. At the time, it had only one customer andjust a couple of products. We were losing market share and the customer wanted to pull back.During a plant visit, Don pulled me aside and asked me one question that still resonates with metoday. He said, “Dortec is a great company, but what does the business look like 10 years from now?”

That really changed my thinking. As a result, the team went into action. Today, Dortec has over 10customers and plants in China and Mexico. It also supports European production. We went from twoproducts to eight, including electronic latches and keypads. Now we’re a leading supplier for GM. Itell that story a lot and I’ve asked the same question to many general managers. Don changed mywhole way of thinking about the future. It’s not just what’s in front of you today as a generalmanager. Take a step back and consider the future.

When we successfully launched the world’s first power liftgatesystem 20 years ago, we had a celebration in Toronto for theentire North American team. Knowing the amount of effort andthe many “firsts” with this launch, Don joined us at the party.

He acknowledged our achievement, saluted our success – andeven engaged in some good-natured teasing by pointing outthat my job was on the line throughout the process. That got abig laugh from the group! Despite the kidding, everyone knewDon had challenged us to be our best during this criticallaunch. Now it was time to enjoy our accomplishments and getsome positive recognition.

Don continues to connect with our teams, challenge us andcelebrate our wins.  It’s a way of cementing our unique cultureand keeping us strong. We have to carry it forward. 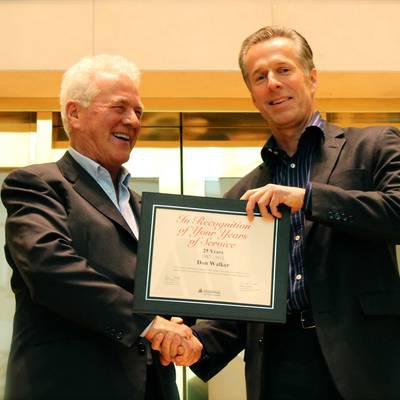 A Tribute to Don Walker